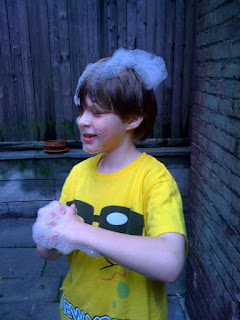 One of Henry's OTs -- the fabulous Jodi Jennings -- shared this photo a few weeks ago of Henry after an OT exercise.

"Henry created a huge tub of bubbles by blowing through a long strip of tubing. Henry called the tubing his elephant trunk. What began as dishsoap and water in a large bin turned into bubbles overflowing like a volcano. Henry was very motivated to keep steady synchronized breathing and had great breath support to endure this activity for several minutes at a time. He was very goal oriented and would only stop if the bubbles reached the top. This activity strengthens not only our facial muscles but also requires core activation. This was a great activity to share with a peer [he was doing this with another child at the OT gym] because of the nice regulatio 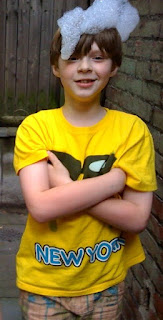 n created by breathing. And then, it turned into a great pallet for expansion of his imagination and pretend play!!"
One of the most amazing things about Jodi is that she really combines so many modalities in a treatment session. She is always changing theses up and building social goals into her OT sessions, often using Floortime principles. The best thing is that Henry loves to go to see her -- who wouldn't if you got to do stuff like this! BTW, She is also a terrific cranio-sacral therapist. Is there anything she can't do (oh yeah, she took these photos too)???
Posted by Kim at 5:03 PM

A few of my favorite things....

Kim
I am the mom to a wonderful little boy with a spectrum of "spectrum" issues. He is a bright, funny boy and a joy to be around. I am a working mom and also try to devote much of my time to assisting, in whatever way I can, other families with children diagnosed on the autism spectrum. I advocate for my son and other children with Autism Spectrum Disorders and mentor families affected by ASD as well. Our family uses holistic, biomedical, and alternative treatments to work toward wellness. I also recently received both my level I and level II Reiki certification and am in the midst of training for a master level certification. I also continue to explore different forms of energy medicine.